The sun is scorching as warm humidity permeates the surroundings. The street is buzzing with people walking by with faceless expressions. Some stand still as if waiting. Some gaze as if to think. Bus operators scream out destinations on where the bus is going. People enter swiftly and sit while waiting for their ride to go.

I see some in short conversations, while smoking. They might be talking about the game between Malaysia and Liverpool yesterday. The score was 6-3. Liverpool won. More people are seen walking. A woman I see sits relaxed wearing sunglasses. She holds her hand to her chin holding her phone. Awhile ago she was texting. To her lover, a friend maybe? Who knows. I didn’t ask her.

The man on my right with a mustache is someone I normally see sitting here. He does the same thing every time. He sits with nothing to drink and with his sights looking on in the abyss, who knows what he’s thinking. His hair is tousled and his eyes look like he hasn’t been sleeping well. Maybe he has problems. It does look like it.

On my left, are two ladies drinking coffee. Now they have changed their seats, to have some conversation with two guys sitting nearby. They are tourist. I’m sitting outside as I observe. Sitting outside separated by glass.

Inside I see a white guy wearing red, with a jovial look as he is describing some interesting thing he did or whatever. He has three friends with him, smiling and laughing along. I see also a husband and his wife talking. The husband listens intently to his wife talking, while their son sips his orange which he has now finished. I think they are probably talking about where to go because they are holding a map. The husband is pointing the map as if suggesting the destination to where they are going. He scratches his ears as if contemplating whether it was a good idea, going there. I don’t know, I’m just observing what I think they are doing.

Two ladies sit outside as well are deep in conversation. One of them looks to be a good communicator. I say this because she uses her hand gestures well. Now both of them are taking pictures. I guess they were probably talking about the right methods of taking pictures. The one with the bigger camera, the one I told you who looked like a good communicator, is pointing to her friend. Something about her friend being crazy. Now she is putting her big camera down.

It’s funny what things come up your mind observing others. You imagine them talking and doing the things that you think of while they roam in freedom, not knowing what your thinking and making up stories from observation. It’s like watching a silent movie and you thinking up the script, putting words to their actions and mouths. I guess there should be a new genre on the market. One that’s called reality fiction, where reality plays out it’s action, and we come out with the story. 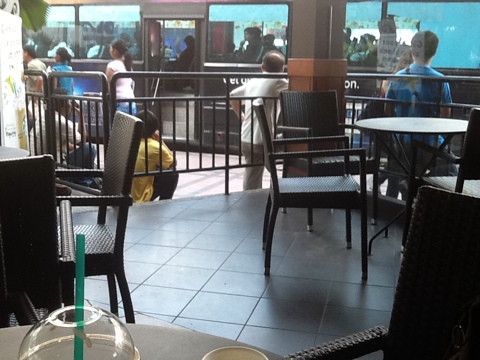